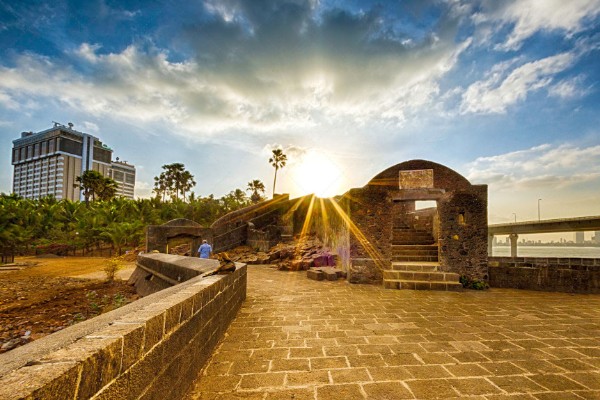 The Portuguese setup shop in Mumbai

In 1640, right around the time when the Portuguese were sinking their roots deeper into the Indian soil- they constructed the Bandra fort at land’s end in Bandra, as the name suggests. Bandra Fort alternatively is referred to as ‘Castella De Aguada’, etymologically speaking, this is the result of mispronouncing of ‘Castelo’ as ‘Castella’ and due to historic reasons, the former mispronunciation has stuck around as widely remained in usage.

It all started with the Portuguese defeating Bahadur Shah in 1534, effectively gaining control over Gujrat and most of the great Indian western coast and trade routes. Naturally, their first course after in solidifying their victory was to build a handful of forts along the coast, Castella de Aguada simply proved to be a strategic point of importance and thus was constructed.

The fort guarded the Mumbai Harbour, being surrounded by the Bay of Mahim and the Arabian Sea in two directions makes for great access to the seafront and marine trading activities and protective patrolling could be done well with the fort serving as a point of control and order.

The Portuguese placed seven main cannons on the fort to guard the seafront, amongst other small artillery and guns. The name of the fort comes from the useable water delivered to the passing ships from the Mumbai harbour.

The British came to power and the Portuguese lost a lot of solid ground. At the same time, the Marathas came to oppose the British, the 18th century was filled with strife and war. The Brits, once they foresaw Portugal losing to Marathas, chose to destroy the Bandra Fort or at least some of it as a precaution.

This gave the British a tactical advantage, as they’d taken away from the Marathas their chance for using the fort as a military front to face the British in Bombay.

Marathas however, invaded Mumbai anyways, in 1739. They managed to win the battle for it and seize control over Mumbai that they maintained until 1774.

The British were obviously not pleased and Mumbai is not just the financial capital of India but also a very important military and naval strategic point. So, in order to seize the control over Mumbai back, the first Anglo-Maratha War ensued and the Brits managed to get a lot of the land back along with the fort.

Later on the Parsi Philanthropist, Byaramjee Jeejeebhoy established his home on the hill that overlooked the fort after he was donated Land’s end by the British in 1830. He was also given seven villages between Borivali and Jogeshwari. The rent that he paid for the entirety of Land’s end was just over two thousand and eight hundred rupees.

In 1878, a road built by Jeejeebhoy was opened to the public, the fact that this was built by his own expenditure is quite impressive and a commemorative stone for the event is still on the intersection of the road with Bhaba road.

Efforts for conservation through the years

The fort is a popular tourist spot for people visiting Bandra and occasionally a movie would be shot in the fort and it would get screen time but none of this popularity saved it from the degeneration and damage that comes with years of weathering and corrosion.

The deputy director of archeology department, Balachandra Kulkarni was on record stating ‘Bandra is hardly a fort anymore, it’s the ruins of what was once a fort that we’ve tried to maintain over the years’

Back in the early 2000s, Bandra Band Stand’s Residents’ Trust started a conservation program to ensure the fort could be saved from further damage. The then member of parliament from the region, Shabana Azmi, held the torch for the whole endeavor. One of the arches and some walls were repaired from the assets she released in regards to this initiative.

The Taj Land’s End Hotel is handling the current and future renovations but the current ownership of the fort and the land it is sitting on is owned solely by the archeological survey of India, who handed the redesigning to a Mr. P. K. Das and along with various repairs and conservative measures that were taking pathways were repaired, natural rock formations were preserved and an amphitheater has been constructed.